Costa Rica is a great place to spend some time. Its year round tropical climate is someting to consider when planning a surf trip, as is its warm water temperature (no need for a winter wetsuit here). San José is the capital city, and it’s also the largest.

Costa Rica is a legendary surfing location and is seen as more of a ‘hardcore’ destination. The recent rise in surf camps, guiding and surfer friendly accommodation has seen things become a lot more comfortable for traveling surfers in recent years. Its geography makes it a classic trip choice, having two coastlines — the Caribbean and the Pacific — which both produce great waves and have quality surf spots. The Caribbean side has a short surfing season and produces large swells from tropical storms off Mexico. The Pacific coast has smaller but more consistent surf generated by low pressure systems located off New Zealand.

The major swell season is April to October, but the clean surf season is December to April when swell from deep antic lows reach the Pacific coastline with offshore winds a common occurrence. Typically morning surfs are offshore and afternoon are light onshore, make sure you are up early to get those classic glassy sessions.

Costa Rica is a country that is blessed not only with consistent waves year round but also many great surf spots. If you are a fan of pointbreaks (lets face it – we all are!) then Costa Rica is your ideal destination. Costa Rica waves of note are Playa Naranjo (featured in the Endless Summer II video) and the quality right rivermouth pointbreak at Potrero Grande (Ollies Point). There are also tons of spots just waiting to be discovered. Costa Rica surfing is definitely recommended, and for the adventurous it could be the trip of a lifetime.

Did we mention – bring your insect repellent!!

Costa Rica Surf – The Bad and the Ugly
Lack Of Roads.
Surf Spots Can Get Crowded. 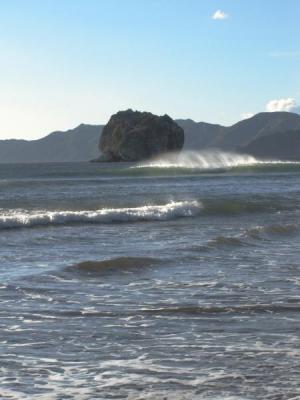 (If you need help with some of the terms used here, have a look at wave terms and surfing terminology.

Due mainly to its subsurface geography, Santa Teresa and its neighboring beaches catch most swells that come from either the north or the south.

Surfing is excellent all year round, although the biggest swells come in the “green season” from May to November.
In dry season there are consistent offshore winds blowing from the northeast, creating ideal waves for surfing.

For this reason the Malpaís waves are known for their consistency, making it a great place to base yourself. No wonder this town has been the location of several surfing contests, including some of international stature.

The local surfers are very friendly and will probably be happy to give you directions to reach all this spots in the area, if you are cool with them and observe surfing etiquette while you’re in the lineup.

Malpaís location between the Central Pacific area and Guanacaste means that it benefits from both the big south swells which hit the beaches south of Puntarenas during the wet season as well as the offshore “Papagayo” winds which create optimum conditions on the Guanacaste coast during the dry season. Another great advantage is the complete absence of crowds; this area is one of the last frontiers of surf exploration in Costa Rica. When locals refer to Malpaís, they mean the whole area between Cabo Blanco Reserve and Manzanillo.

Here’s a quick guide to a few of the better beaches in the area. To see all the beaks we’ve got listed, browse the Costa Rica surf map further up this page.

El Carmen beachbreak: It is the best wave for beginners to learn on. A long right wall and shorter section left break over a gradually sloping sand bottom. You can surf this beach break on any tide, but a high tide is best. The wave is really fun and highly recommended for all surfers from beginner to expert. The wave is slow and long. If you fall, it’s all sandy bottom.

Santa Teresa: Santa Teresa beach break is very similar to Playa Carmen, but pickier with more hollow barrels. It works on both high and low tide, and the wave is usually faster and steeper than Playa Carmen.
Santa Teresa has a longer beach and, with a good swell, many different spots start to peak including La Lora and Roca Mar.

Suck Rock – “Suck Rock” is at the northern end of Santa Teresa in front of Roca Mar. This break works on a big swell from any direction. This wave is truly a playground for the experienced surfer. Long, right barrel rides are characteristic of this spot.

Playa Hermosa beachbreak: Playa Hermosa is the next beach north from Santa Teresa, and even less crowded. Peaks all along the beach. When the beach breaks get big, the reefs and points start to work.

Playa de Los Suecos reefbreak: Turn left at the crossroads go 4 km. And park where you see the fishing boats. Walk south 100 yards along the rocks and paddle out through the channel next to the hotel. The wave is a lefthander with a fast take off followed by a long workable wall. Gets hollow with size and offshore

Punta Barrigona pointbreak: Between Los Suecos and the crossroads turn down to Mar Azul restaurant. A long lefthander wraps round the point turning into a great hotdog wave as it moves through the inside. This wave does not barrel much and is fairly slow, making it a preferred spot for long-boarders. Surfing is best here at high tide.

If you feel like exploring further, Manzanillo is a few miles north. The reef (not these reefs 😉 ) is about half mile outside shore and holds really big swells.

And there are some secret spots you will get to know if you hang out with the locals.

Thanks to Lisandro Lopez for the information about the Santa Teresa area. Lisandro is the owner of a small surfers hotel in Costa Rica – what better place to stay and get some great insider information on the local surf conditions.